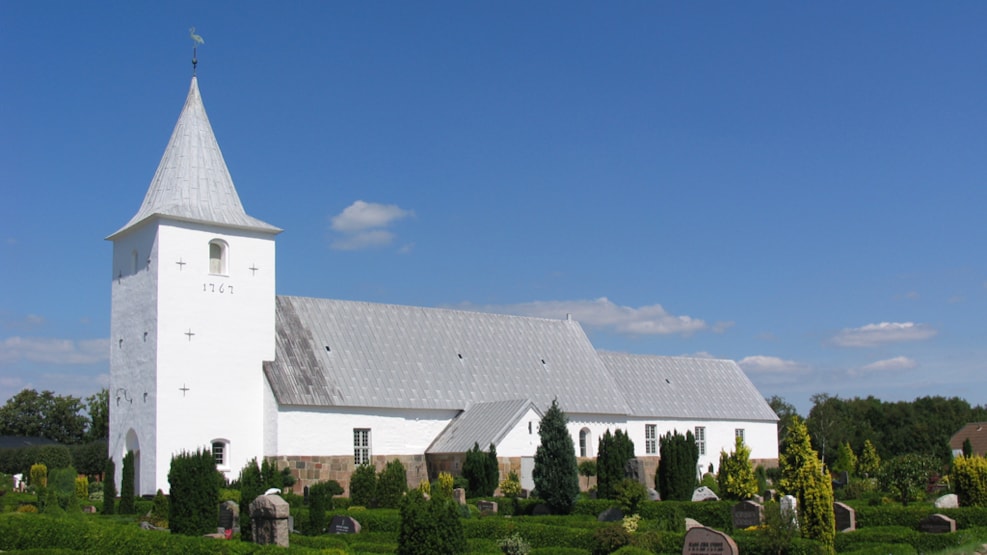 The Church of Aal was consecrated to St. Nicholas, built of ashlar and tufa and dating from about 1200. Extended several times, the latest addition being the tower at the time of the Reformation. Known for its romanesque frescoes uncovered and restored in the 1880s.

In Oksbøl is Aal Church, which is a very elongated church. The 42-meter-long Romanesque church is not only known for its amazing reliefs with unusual scenes from the birth and upbringing of Jesus. It houses some of the country's largest Romanesque frescoes, including one of Europe's most interesting equestrian friezes, often compared to the Bayeux wallpaper.

The Romanesque church has been gradually expanded to its present size. The oldest parts are from the 12th century. The choir was extended around 1250-1300. The porch is from the 13th or 14th century and the tower from the 16th century.

In the south wall of the choir there are two interesting remains from the old church. Here is a Romanesque picture square that possibly represents a lily, as well as the runic inscription "flower" - presumably the name of the stonemason. The runic inscription has been turned upside down during a rebuild! In three of the granite blocks of the porch, cross marks are seen and in two, square depressions are seen.

Ål Church is especially known for its Romanesque frescoes, which are among the largest in the country. Of particular interest is the equestrian frieze, whose creation may have been inspired by the Bayeux wallpaper. There is disagreement about the exact interpretation of the equestrian battle scenes. There is a sea of ​​theories spun over crusade battles, Rolandskvadet, King Arthur and the Holy Grail, the battle of Lydannis, today Tallinn, in 1219, where Dannebrog fell from the sky, and so on. The prevailing theory, however, is that they depict King David's battle against his son Absalom. In addition to the equestrian battle images, parts of a doomsday production and a revival scene can be seen. The legend of Skt. Nicolaus, to which the church is consecrated, is also made. The frescoes were for the most part uncovered in 1886 and restored in 1888.