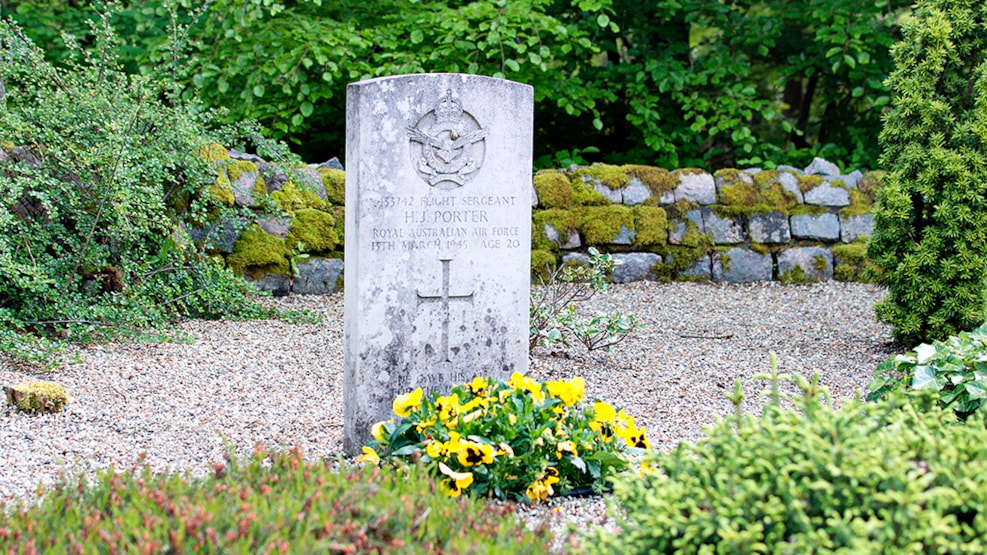 English Lancaster bomber ME449 was shot down by a German fighter jet on March 12, 1945. Five of the crew members survived when they jumped out with a parachute and hid with Danes in the area who later smuggled them to Sweden. Unfortunately, two crew members died in the crashed plane, and the area has been donated for the construction of the 2 burial sites.

On the evening of March 12, 1945, an English Lancaster bomber with a crew of 7 was shot down by a German fighter jet near Lyne. The plane crashed between Vallund and Østergårde, and before the crash, 5 men parachuted out and were hidden with Danes in the area and then smuggled quickly to Sweden.

The 2 crew members who died in the crashed plane got local people out and transported the bodies to Tarm Hospital. The Germans came the next day and demanded that the bodies be handed over. The bodies were driven out into the plantation, and buried without marking a burial site. The local haulier who had driven this transport was able to designate the site, which was marked with flags and square stonework on the day of liberation on 5 May.

On 14 June 1945, the parish council decided to donate the area for the construction of 2 burial sites, and maintain it in the future. The burial site was constructed for funds raised, and the circular ring wall of cobblestones was erected at the same time as the demarcation of the burial site.

On Sunday, August 12, 19455, there was a church funeral service at the cemetery.