The Burnet Rose is a sight worth seeing; a very old rose, which was probably present here, along with reindeer during the Bølling oscillation period. Usually growing to about 100cm, it has small, straight prickles, white/yellowish flowers with a wonderful fragrance. That it even manages to survive in the sour and sandy soil here, is probably because its 5m long roots can reach a layer of sand where nutrion and calcite are still present.

The Burnet Rose can be found in large parts of Europe and Asia, and in Denmark it grows in the wild along the North Sea and in a few areas along the Limfjord. The small berries or hips it produces have been used for making jam, marmelade, and wine and they are very good for making schnapps. The Burnet Rose blossoms in June and July.

The Japanese Rose or rugosa rose is very common in dunes, beach meadows and in live fencing or hedges. This plant is not indiginous to Denmark; it is an invasive species with a high degree of hardiness: it is tolerant to salt, sand, and strong winds. Its grass-green leaves are smooth on top and a bit sticky and rugose on the underside. The stems of the Burnet Rose have straight prickles and its red or white flowers are very fragrant. The hips or berries are orange to red in colour with five large leaves at the top; they ripen during the fall and are used for marmelades, chutneys, icecream, and much more.

The Japanese Rose spreads very fast and that is not good for other plant life and wildlife; for example, both Beachgrass and Wild Rye are outrivalled by this plant, and it has therefore been removed in several areas in order to make room for the indigenous plant life.

Lady’s Cushion or Armeria is a common flowering plant in Denmark, especially in sandy soil near coastlines, on beach meadows, in dunes, and by the edge of roads – also inland. It has dense, low inflorescences and its leaves are located close to the ground in a rosette-like pattern; from these, long and leafless stems grow. Its pink and fragrant flowers are located at the top of these stems in clusters of 10-30.

Lady’s Cushions are tolerant of salt because they ‘sweat’ out the salt through small glands on their leaves. With their tough stems, this flower is great for making wreaths. 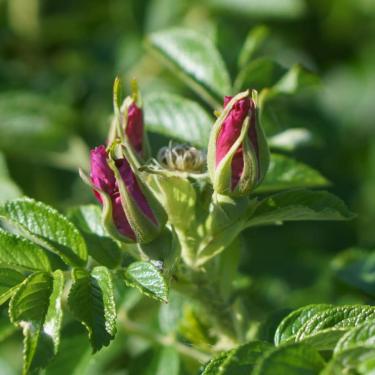 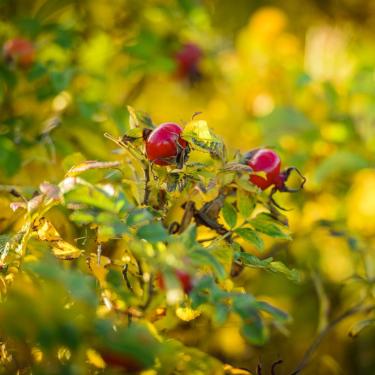 Sea Buckthorns are also called sandthorns and grow up to 3m tall; almost like a shrubbery tree. It has bug thorns and its leaves are narrow and greyish-green with silvery hairs on the underside. The yellow to orange berries are actually nuts and very rich in vitamin C; they are used for marmalade and schnapps, and many chefs have begun using them in recent years.

In Germany, this plant is called Fasanbeere (pheasant berries) because pheasant both eat the plant’s berries and seek shelter or hide under its branches. Sandthorns have a huge root system with many shoots, and the plant is great for dunes. Furthermore, the bacteria that live in its roots enable it to feed on the nitrogen in the air; this is why it is able to survive in such a harsh environment. Sea Buckthorns require a lot of light and the shoots on the bottom and most inner part of the plant are killed by the plant’s own shadow.

Everybody who has walked near dunes knows Beachgrass. Its Latin name is ammophilia arenaria which simply means ‘lover of sand’. This plant is perennial, it blossoms in July and August, and it has small, rigid, greyish-green and rolled-up leaves which are pointy at the top. These leaves can grow up to 120cm and they are rolled-up to prevent water from evaporating, which makes the plant able to live in places with very little water. Beachgrass are planted in the dunes to prevent sand migration; its fast growing roots grow this way and that and are ideal for holding the sand in place. Also, the more sand it covers, the faster it grows.

Wild Rye or Leymus are often mistaken for Beachgrass, but this plant has flat, broad leaves with a waxy surface which protects it from drying out. This surface also gives Wild Rye a more bluish-grey colour. Wild Rye flowers are far coarser that Beachgrass flowers, which resemble soft tufts.

The Crowberry is one of the oldest heath plants – even older than heather. This plant is an evergreen low shrubbery which grows along the ground with long stems that spread its taproots. When the plant grows freely, without the influence of other plants, it becomes circular in shape, when you observe it from a birds-eye-view, and it can merge with other Crowberries, forming a thick carpet of plants. It blossoms in April with small deep-red flowers, and in August it grows small edible, black berries (also called crowberries), which are not so coveted by humans, because of the berry’s 6 to 9 stones and the fact that it is so sweet.

These berries were once an important vitamin supplement for both people and animals in this area. Crowberries grow in both dry and moist soil low in nitrogen and other nutriants; such as sand, dunes, heaths, and bogs – but mostly in t 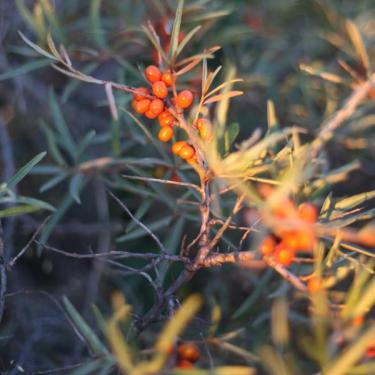 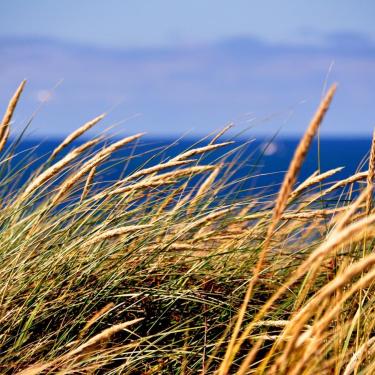 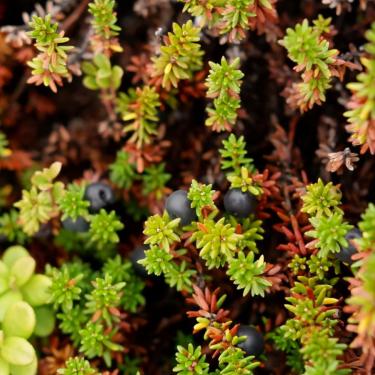 Bladderwrack is very common and widespread algae along the Danish coast. It is a brown type of seaweed which grows in bushels, in shallow waters; it can withstand partially drying out when the tide is low. You can identify this plant by its paired, air-filled bladders. Bladderwrack grows on rocks and clams; it has no roots and is nourished via its surface instead. You can often spot this seaweed on the beach, in piles of all kinds of other species of seaweed. These seaweed piles are full of nutrients for other plants and animals. Seaweed used to be used as a fertilizer by farmers.

Wild Thyme forms beautiful purple-green blankets in large nature areas. It grows in subshrubs in large, dry areas like heaths and dunes. If you rub the leaves of this Thyme, you will recognize its characteristic fragrance. Wild Thyme makes strong and tasty schnapps – you need to use both its flowers and leaves, and the schnapps should soak in it for 2-3 days.