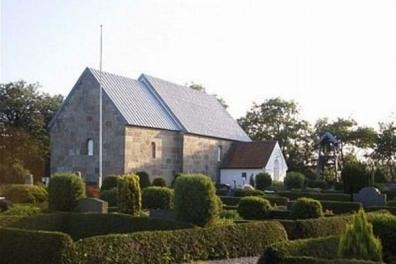 At a hillside close to Vorgod Å, a small casehardent church from the 12th century is situated...The choir and the nave are made of granite squares. Later on, the porch has been added to the church, in romanesque design and the south door has been bricked up.The church bell, one of the oldest in Denmark, is placed in a bell frame; the following inscription has been engraved:"In the year of our Lord 1329 I was made by Poul". Inside the church, the baptismal font, made of granite, is placed and most likely, it is as old as the church itself. The present chritening plate is made of pewter; in 1955, it was donated by the Danish Minister of Ecclesiastical Affairs at taht time, Jens Sønderup and his wife.The altar piece is from 1697; the main theme is the Foundation of the Holy Communion.A minister's bench from 1585 has been placed in the choir.The pulpit is in Baroque design,dated back to 1700 and the sounding board is a copy of a previous one.In 1986-87, the church was thoroughly restored.