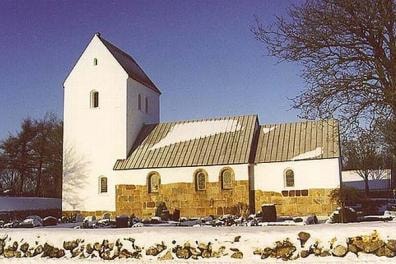 Ølstrup Church is a beautiful church located in the West Jutland landscape. The church is probably from the year 1180, and is whitewashed in granite blocks and bricks. In 2014, the church had its painting stolen by Emil Nolde, so the local artist Alice Raunholt painted a new altarpiece for the church. Fortunately, Ølstrup Church Nolde got the painting back, and it can be seen in the church today.

Ølstrup Church is located east of Ringkøbing, and belongs to Ribe Diocese. The church was built around 1180, and is believed to have been rebuilt in the late Middle Ages from materials from a previously demolished Romanesque church.

The church is partly whitewashed, and built in granite blocks and bricks. In addition to the nave and chancel, it has a newer porch to the north and a tower from 1949 to the west. The nave and chancel are covered with lead, and the tower is with brick.

In the church furniture you will find an altarpiece by Emil Nolde, called "Dinner in Emmaus". It is inspired by the account in Luke. 24,13-35, and was painted in 1904. The picture was stolen in March 2014.

For this reason, a new altarpiece was erected, painted by Alice Raunholt - one of Ølstrups residents. In 2019, Emil Nolde's painting returned, and has been hung up in the church again. There is a leaflet in the church, which tells more about the church and the stolen altarpiece by Nolde, respectively.

In the church there is also a Romanesque baptismal font of the West Jutland type, and the pulpit from the Renaissance from the beginning of the 17th century.