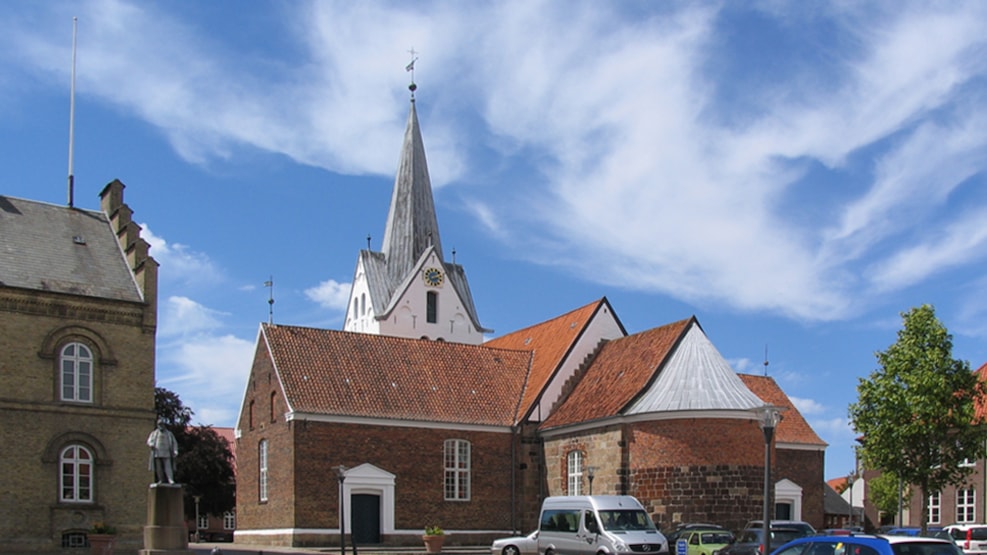 Sct. Jacobi Church was probably built between the years 1150 and 1225, and is a very historic and beautiful church, which occupies the center of Varde. The church has regularly undergone renovations, but looks great with older artifacts, such as the altarpiece and the baptismal font.

It is not known with certainty when Sct. Jacobi church in Varde was built, but it is believed to be between the years 1150 and 1225.

At that time, the church was a large solid block stone building, which was 35 m long and 12 m wide. The church had a nave, choir and apse, and was consecrated to the Apostle James, one of Jesus' 12 apostles.

In the 15th century, the large tower was built, and for the next hundred years the church stood with a tower, nave, coffin, apse and a small porch. In the years from 1809 to 1812, the church was rebuilt into a cross church, with the two large transepts being added. This happened because the other parish church in Varde was demolished.

There were large windows, decoration over the front door facing the square, smooth-plastered walls and the pulpits at the ends of the transept bear the mark of classicism, which was the style of the time.

In 1869, the tower was given its current end with an octagonal spire rising over four pointed gables. The tower with spiers is 43 m high.

In 1949-51, the church underwent a more extensive restoration. Here the flat ceilings of the transept were replaced with plastered barrel vaults.

In 2016 through the church another renovation. There were new chandeliers, new flooring and new coloring of benches, organ and kneeling. The church therefore appears more bright and friendly now.

Inside, the church has, among other things, an altarpiece, which consists of eight paintings and many inscriptions in Renaissance style. It was donated by Otto Rasmussen and his wife Maren Nielsdatter and was erected on 13 September 1616. The paintings themselves were made by Hans Paulsen.

The church's baptismal font is from 1437, and is a mixture of iron and bronze. On the basin there are four human figures, and in the middle of the basin there is a Latin inscription “In the Lord's year 1437 on Skt. On George's Day, this font will be completed in honor of the Blessed Virgin Mary and in honor of the Apostle Sct. Jacob in Varde church by Niels Klokkestøber's hand ”. The baptismal font itself is made of silver, and was donated by a group of siblings in memory of their parents in 1952.

The pulpit is from the middle of the 17th century, and is in Baroque style. The church bell is relatively new from 1964, and is a large bell with 42 bells. The carillon can be operated both manually and automatically.

Find more information about the church and services at Sct. Jacobi Church's website.