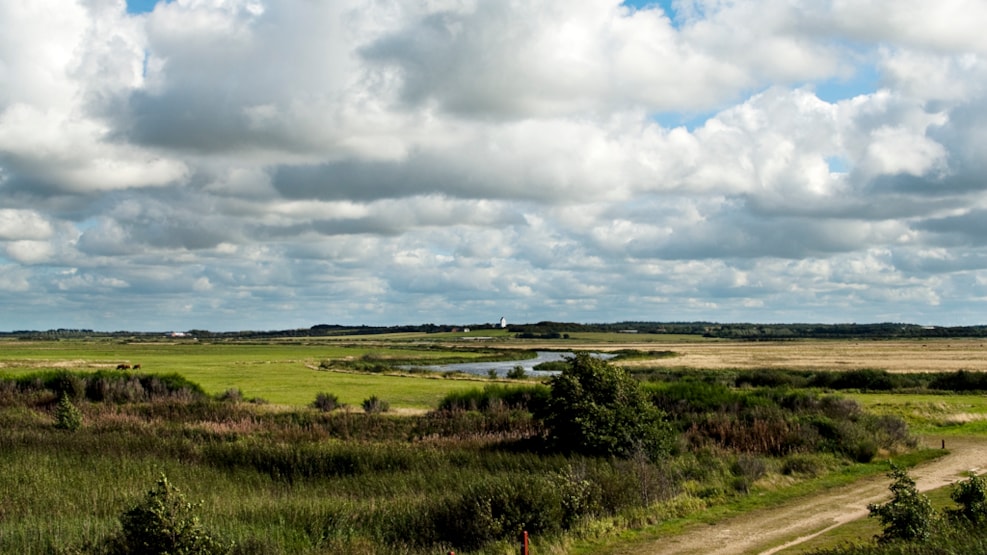 Skjern Å is the pride of Ringkøbing-Skjern Municipality. In this beautiful nature area, you can take a long walk, catch a large salmon, or take a trip in a canoe.

This century, in the Skjern Å river valley, major invasive actions were taken against the rivers natural flow. After a series of isolated attempts at building dams and thereby controlling the river, in the 1960s, a very large drainage project was set in motion. The winding river was forced into straight canals and pumping stations were built, to lead the water away from the river valley. 4000 ha of meadows and bogs were transformed into agricultural lands, which was then in shortage; the damp meadows, haystacks, and livestock were replaced with productive grain fields and agricultural machinery.

However, today – about 50 years later – the meadows and wetlands have been restored. The Skjern Å Nature project includes approximately 2200 ha or about half the area which was drained in the 1960s. The project in the Skjern Å river valley is the largest nature restoration project in northern Europe and it was begun in 1999 – after years of planning – and finished in 2003. The restoration has made the area a unique piece of nature of international importance and it is the only nature area in Denmark to receive the European award Europa Nostra, because it has become such a thriving piece of nature and wildlife, which benefits animals and people equally.

Thanks to Real Dania’s project ’Stedet Tæller’, three of the pumping stations were restored into fully functional pumping stations. The project is about enhancing the experience of the area, as well as the accessibility. The pumping station to the south east, between Tarm and Lønborg, has been equipped with viewing platform; Pumping Station East has had an extension built on the roof, and Pumping Station North has been equipped with an elevator to its tower and a restroom for the disabled. Small architectural changes show how a classic, physical, and industrial element like a pumping station can be transformed and be bestowed with a new meaning and thereby cast light on the potential of these far out areas, showing the way to a new positive development of areas outside Denmark’s most populated areas.