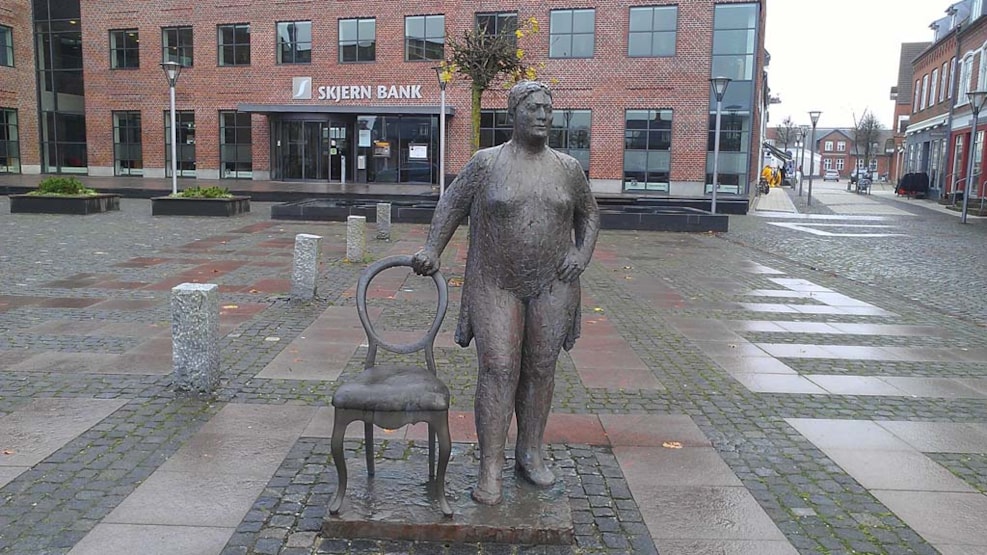 "Skjernpigen" is a beautiful bronze sculpture by Hanne Varming from 1998, and came to Skjern on the occasion of Skjern Bank's 75th anniversary competition.

"Skjernpigen" is the result of a jubilee competition printed by Skjern bank on the occation of the bank`s 75th anniversary 1981, it was expected however, with the unvailing of statue until urban renewal of downtown: Station square, Bank square and Hotel Skjern were compleated.

At the unvailing, said New Carlsberg foundations director, Hans Nørregaard-Nielsen, that the figure should symbolize "a person who is willing to get something out of life, a life of fertility - the Figure shall get us to stand by the joy of what we are. "May you come to slide the figure to shreds".

"Nicole with the chair" is actually the character´s real name according to the artist Hanne Varming. She told about Nicole, the Salsa girl who she had met at a party, and who since more than one time had been a model for the artist.

"There were all the young girls dancing salsa and so on. And suddenly one of the girl´s shouts: Nicole - come and dance - you are the only one who can do it proper - and that she could", told Hanne Varming about her first meeting with Nicole.
The inspiration to the sculpture came in glimpse: "When I had to make this figure, Nicole one day came in to my ateliere and stood by the chair, and chair and model just fit together. It puzzled me, and it still does, and I hope that you will be puzzled in the same way", said the artist in her short handover speech.

After the unvailing the figure is surely become one of Skjern´s most photographed "girls".That is where most tourist photograph themselves in Skjern city.